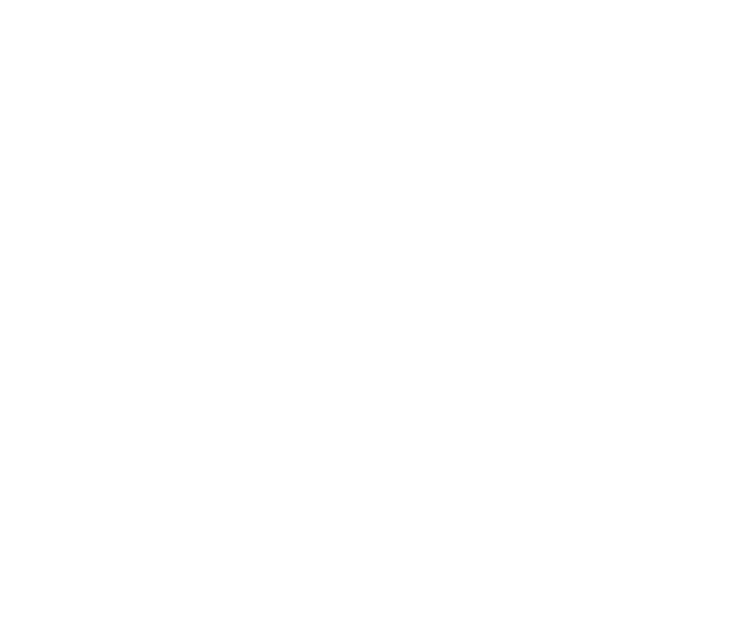 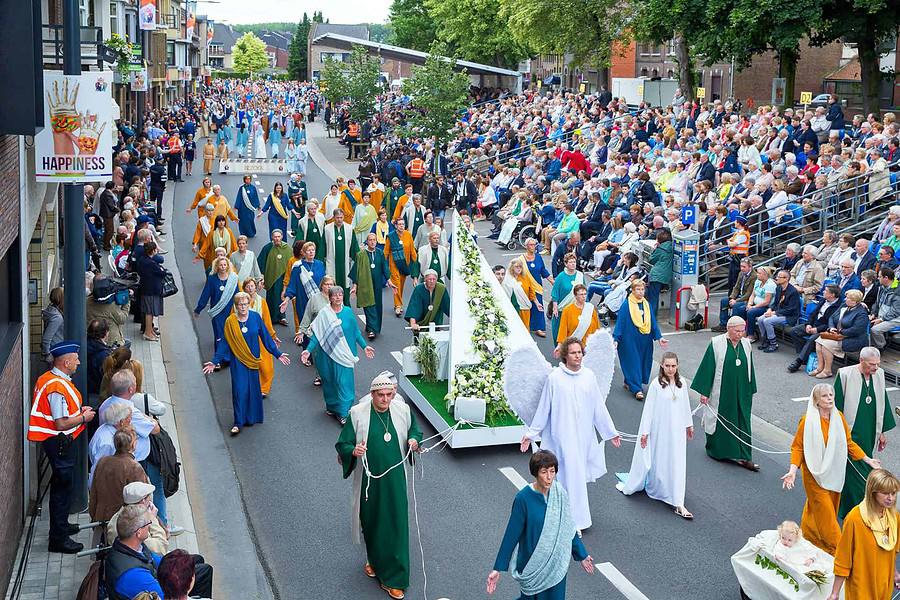 THE LARGEST PROCESSION IN THE COUNTRY

Tongeren, the oldest town in Belgium. First sanctuary of the Holy Virgin north of the Alpes, pilgrimages were already organized during the Middle Ages. When in 1890 the mercyful statue “Cause of Our Joy” was crowned, the inhabitants of Tongeren decided to extend the pilgrimages to Coronation Celebrations every seven years. This tradition is kept alive up to the present day. The 19th edition in 2023 will have its climax in the week from 2 to 9 July. By means of pontifical masses, processions and evening plays, with the cooperation of threethousand townsmen, but also through concerts and by decorating the streets, Tongeren expresses its admiration for the “Cause of Our Joy”. We hope to welcome you in 2023.

Already in 2019, the inhabitants of Tongeren started with the preparations of the Coronation Celebrations 2023. 3000 inhabitants of Tongeren (of a grand total of 30000 !) will participate in the Coronation procession and the evening play on a large stage on the Market Place of Tongeren, four times during the coronation week. During both manifestations, the life of the Virgin Mary and Christ is depicted in a devote way. The 18 group leaders take care of their participants, clothing, music, carts and choreography. It is customary for the participants to pay for their own procession gown.

The participants are of all ages. In 2016, the youngest participant was barely a few months old and the oldest 88. It is typical for the Coronation Celebrations that the participation is a family event. Families with more than 6 participants are no exception. It is a tradition that residents of Tongeren who in the meantime live elsewhere (f.e. in Australia) come back to their hometown. 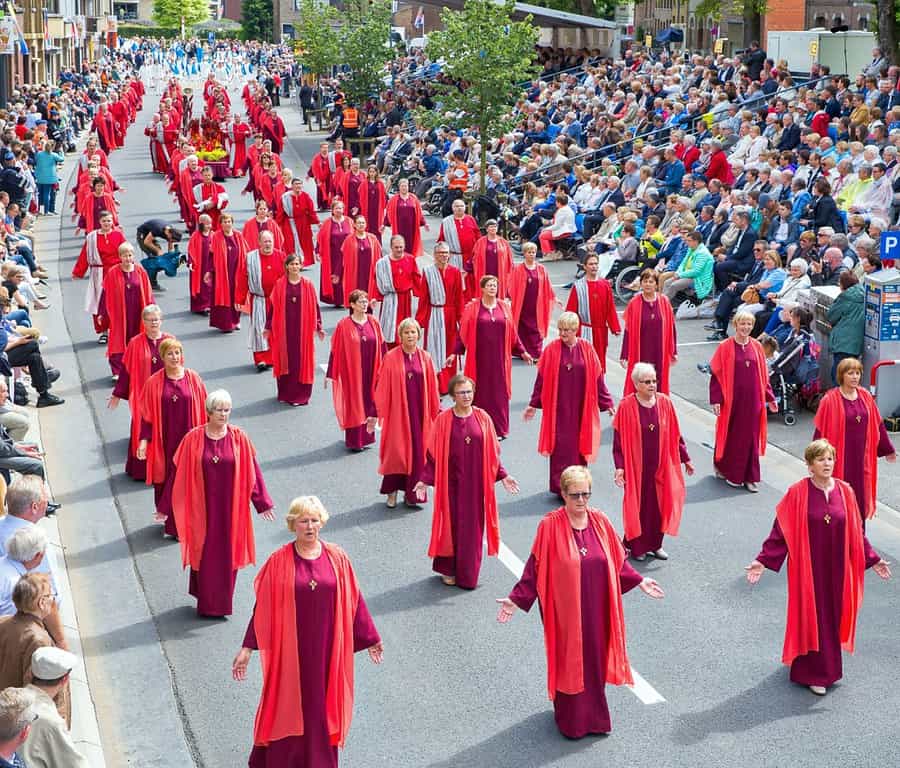 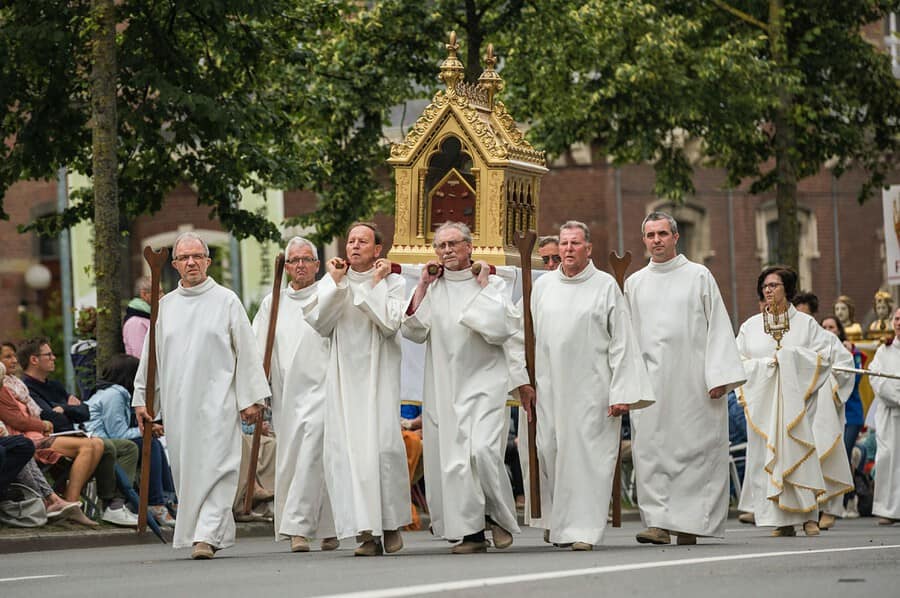 THE DISPLAY OF RELICS

Relics refer to the Saints who were here before us. It was probably Rodolf van den Beek who organised the first septennial display of relics in 1390. The displays lasted for fourteen days and were concluded with a solemn procession in which the relics were carried around the church. The last pilgrimage was in 1790. The French occupier did not allow the display of relics anymore. On 1479 the chapter granted the Brotherhood of Our Lady the privilege to order a new altar and a statue of the Virgin Mary for that altar. The statue, depicting Mary as “Cause of Our Joy” is cut from walnut, is 1.60 m high and weighs 70 kg. At the end of the 19th century, the Roman Catholic Church had a special devotion to the Virgin Mary, which was demonstrated by the coronation of statues of the Virgin. The Coronation of the “Cause of Our Joy”was celebrated on Sunday August 31, 1890. After the celebration the Coronation Procession went through the decorated streets and squares of the town. That is the origin of the Coronation Celebrations. The inhabitants of Tongeren found this to be the ideal occasion to go back to the earlier septennial pilgrimages. 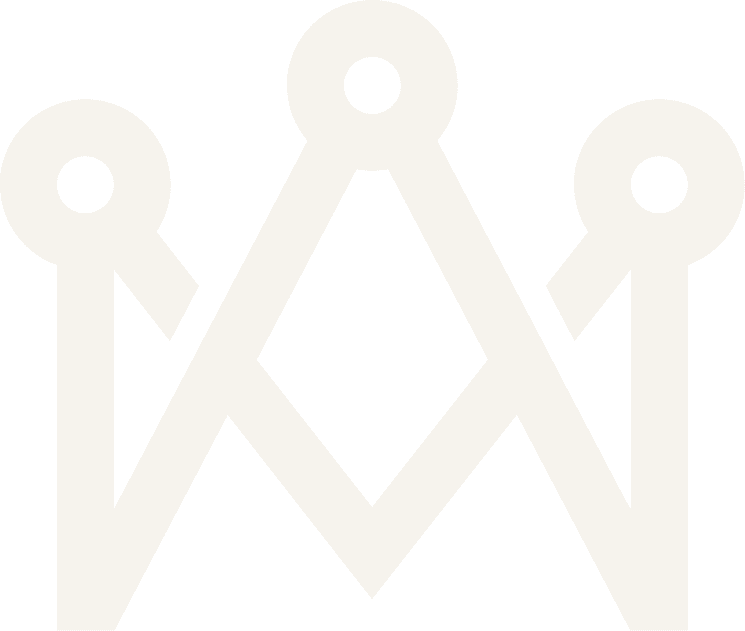 THE OPEN - AIR PLAY OF THE VIRGIN MARY

If you are able to stay in town during the whole evening, we will offer you a unique spectacle free of charge. Seats are payable and can be reserved. Location of the play is the “Grote Markt”, the town market place. The scenery is formed by the static tower of the basilica at the back, the beautiful city hall at the right and the proud and sturdy Ambiorix in front.

3000 participants will show you the revival of Mary in a fantastic world of sound and light. The play brings you Mary, Mother of Jesus and our Mother and it develops into an unforgettable apotheosis when the merciful statue will be carried out of the basilica. Hundreds of players and thousands of spectators will chant honouring Mary. 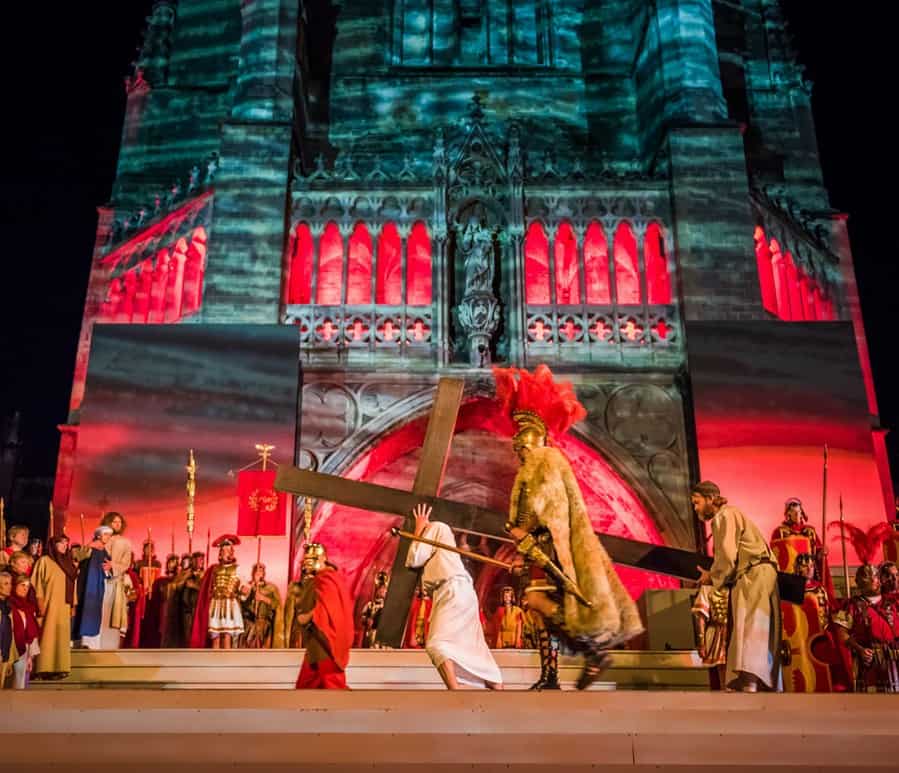 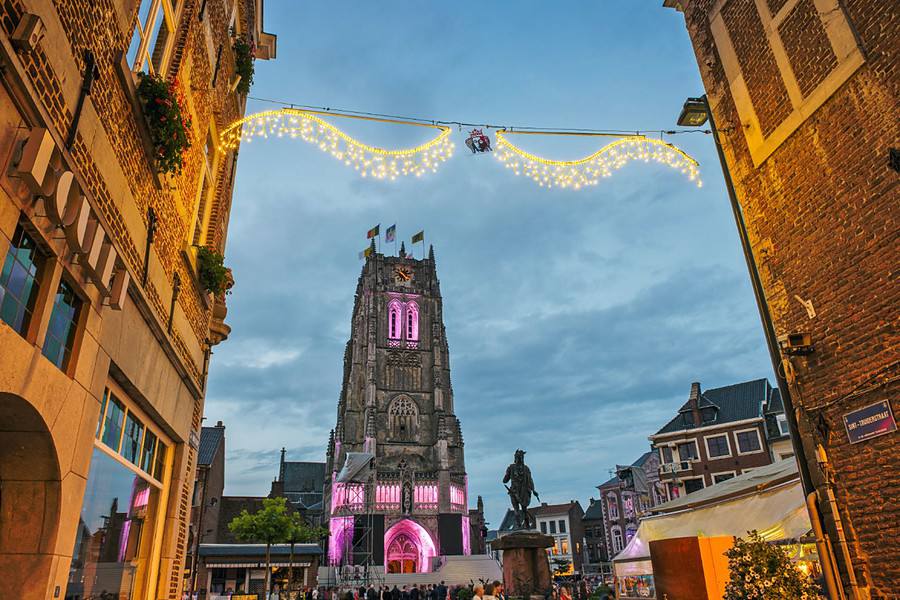 During the Coronation Celebrations, the inhabitants of Tongeren like to decorate the streets of the old town centre with banners, flowers, lights as well as decorative corners, religious, historical and folkloristic scenes.

The evening play is a re-enactment of the procession but on a stage. Because everything takes place on one stage and is entirely supported by text. 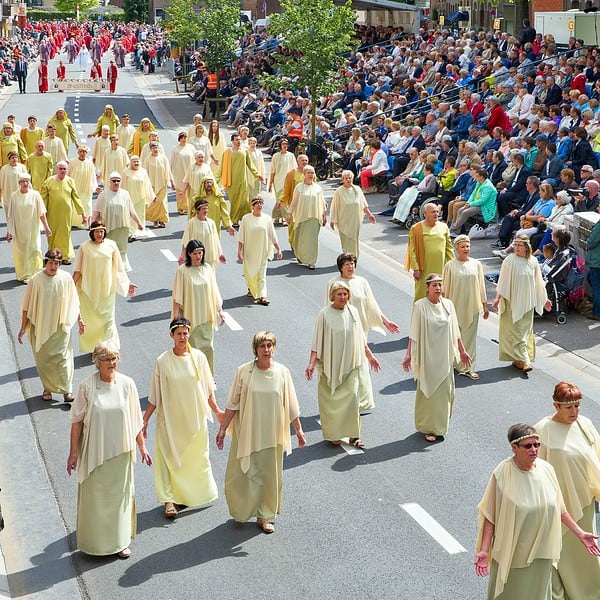 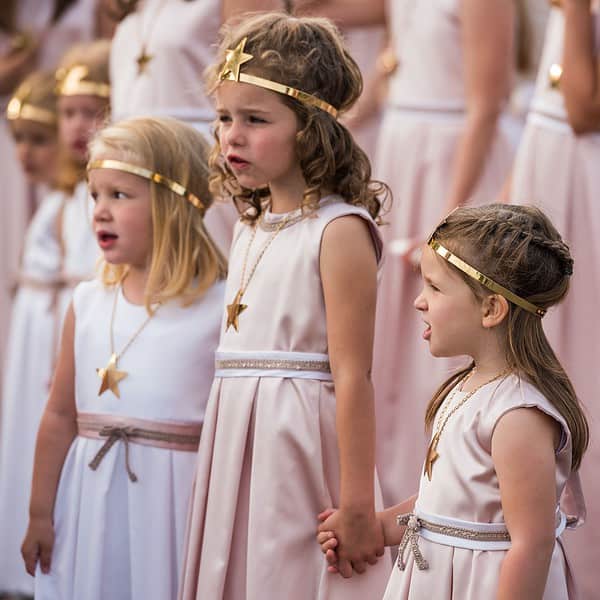 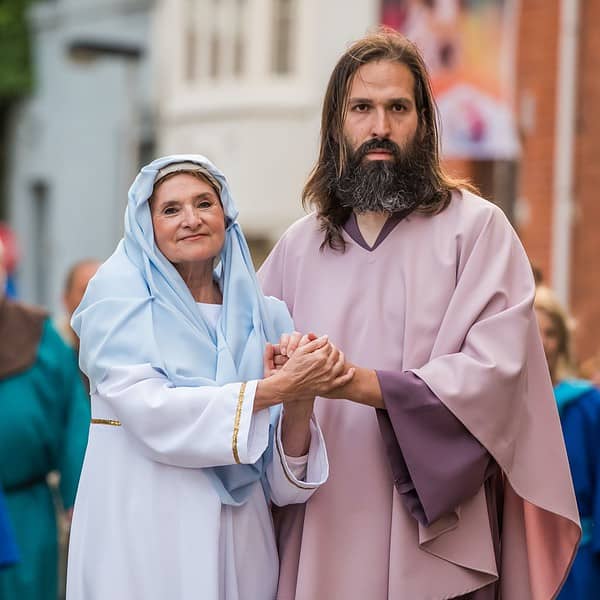 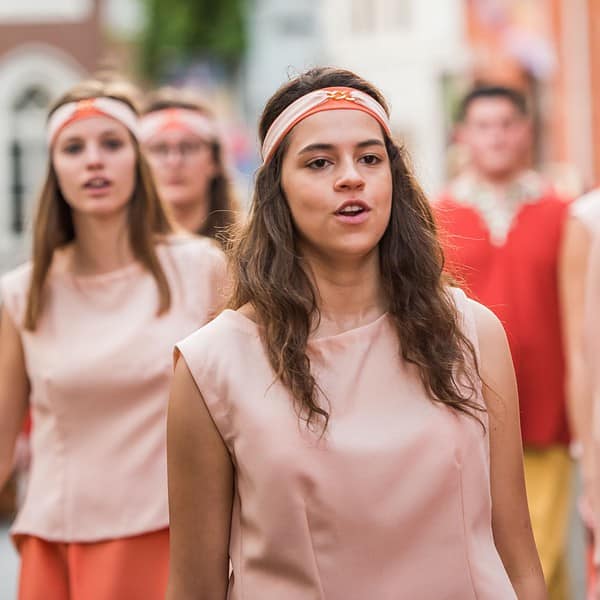 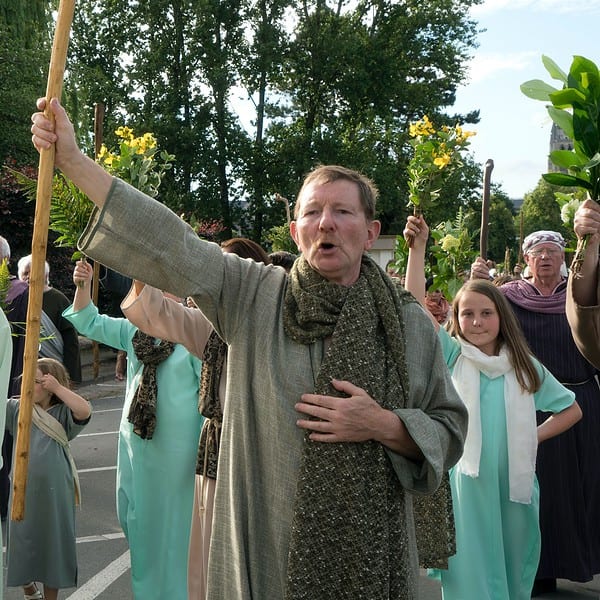 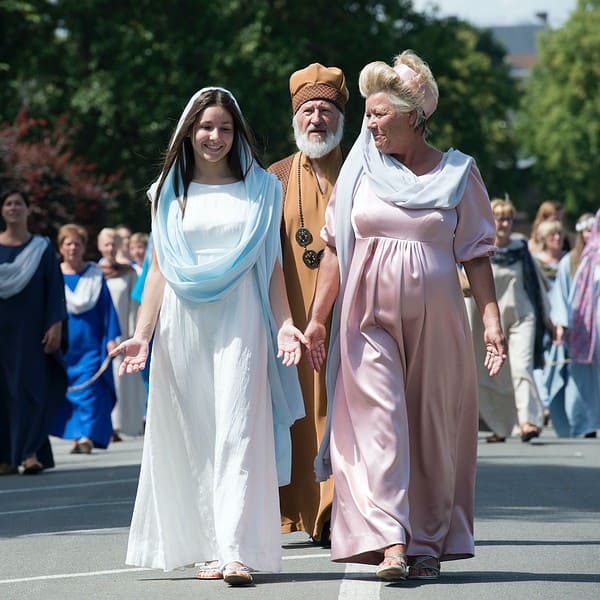 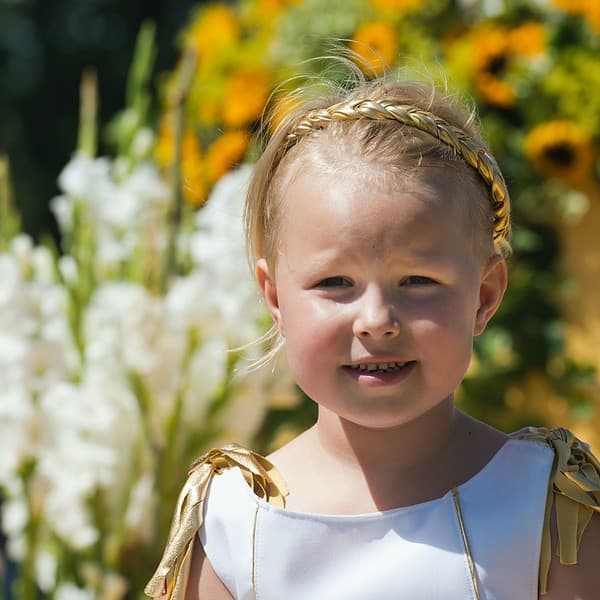 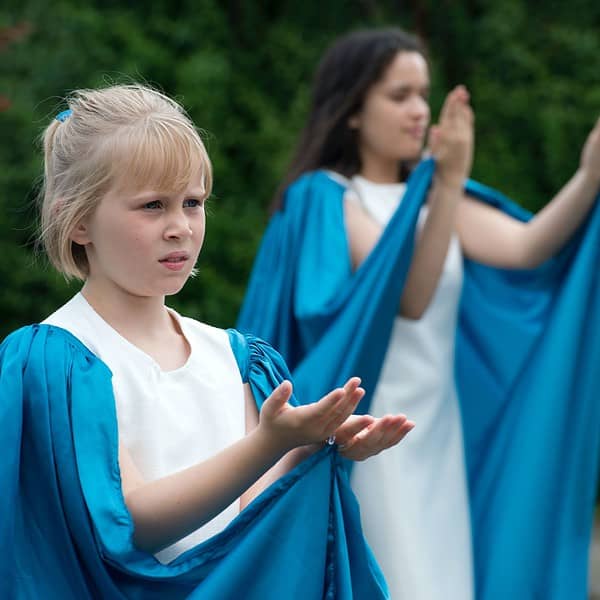 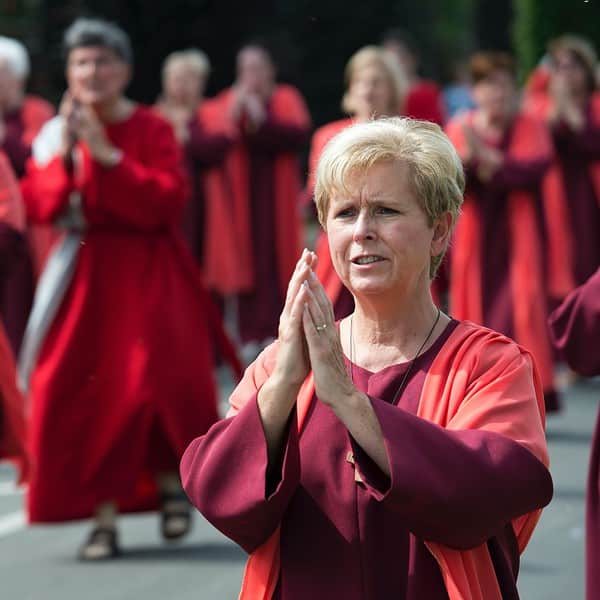 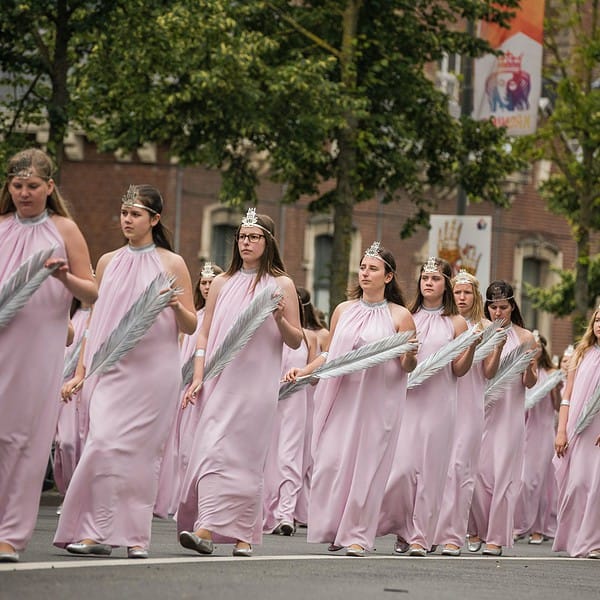 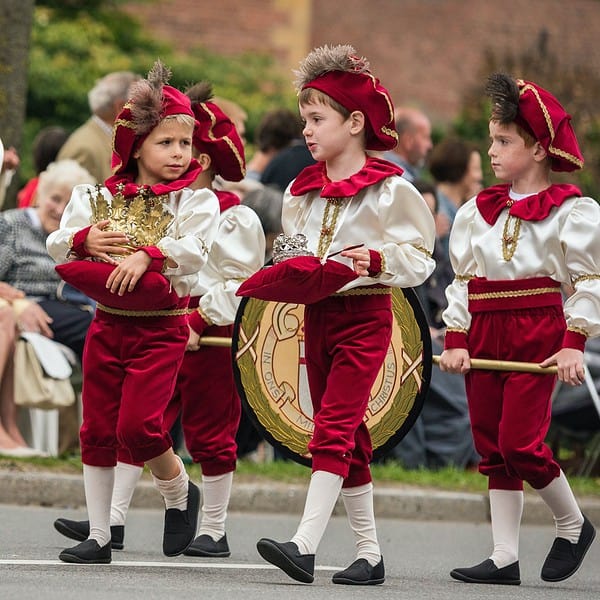 OPENING HOURS
Mon/Tues/Wed > 12:00-6:00 p.m.
Do > 08u00-18u00
Vr > 12u00-18u00
Sat > 10 a.m. to 5 p.m.
Sun > 08h00-12h00
© 2023 Kroningsfeesten Tongeren - All rights reserved.
Website by Artcase & Webmatic
Manage cookie consent
To provide the best experience we use technologies such as storing cookies. Approving these technologies ensures that we can give you that best experience. Ignoring cookies may cause some features to not work as intended.
Manage options Manage services Manage vendors Read more about these purposes
view preferences
{title} {title} {title}

Mijn winkelwagen
Your cart is empty.